a few days ago my friend robin appeared on national television in new zealand, and the interview was available on the internet as well, so i had a chance to view it. 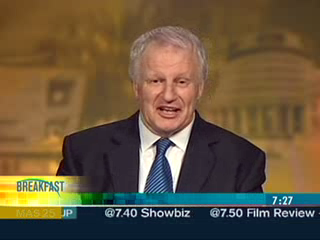 i feel the urge to inform you that i took about 20 random snapshots of the video, and this was the best one i could get.

anyway. here is the file for those of you who would like to view robin being interviewed on new zealand tv.

let me give you a brief summary. robin is wearing a black suit and is being interviewed as the president of the post primary teacher’s association. the interviewer wants to hear arguments for the state to invest more into teaching and robin delivers, bundled with a lot of mumbo jumbo. the main point being that 30+ students per class makes it impossible to establish personal relationships with the students. and since the state wants a “move to personalized environment”, something needs to be done. (more teachers, more money, i suppose.)

to further argue his case, robin tells that in finland (yes, finland!), you need at least a master’s degree to teach in any area of education and they (we) only choose about 15% of the applicants. well ain’t that a bold statement! it sure wasn’t hard for me to become a substitute teacher while still being in high school (gymnasium). as for the 15%, according to the åbo akademi statistics (representative for the swedish-speaking minority), 88% of the applicants 2006 were admitted. somehow i doubt the situation for the rest of the country should be very different.

but hey, who the hell cares, robin mentioned finland on new zealand television!